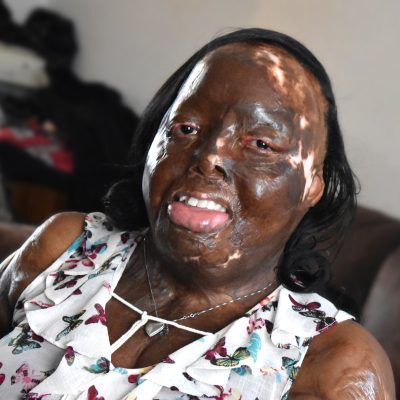 "If I could make a difference for even just one person, I could serve a part of my purpose for why I'm still here and living."

Jacqueline is a 28-year old who after experiencing burns over 90% of her body at only 5-years-old, has accomplished just as much as she has overcome. After spending a year and a half in the hospital to manage her condition, Jacqueline was feeling nervous about the amount of adjusting and recovery that was yet ahead of her.

During her initial hospital stay, Jacqueline had parts of her arms and legs amputated and was thus unable to walk the same way she did before. She also had to adjust to her new tracheostomy, and knew that frequent hospital stays were still ahead in her future. She wondered what it would be like going back to school and how she was going to be able to catch up and keep up with her classmates, but with a lot of hard work and planning, she was able to stay on-track. Now an adult, Jacqueline says that her burns still cause issues with things like blood clots, lingering pain, and overall mobility. She says “even normal things like going to the dentist can be difficult.”

Jacqueline has been a client of The Coordinating Center since childhood when she came home from the hospital. Throughout her time with The Center so far, coordinators have helped arrange for Jacqueline’s essential nursing hours, assisted in locating medical providers and supports, and even helped Jacqueline find a way to fix her walker, something essential to her independence, when it needed repairs. “The Coordinating Center is a great resource because they show so much care and they make sure that you have everything that you need. They have helped me make sure that my health is in order.” She adds, “I’ve really been able to develop a personal bond with my coordinator.”

Jacqueline began developing goals from a young age when new experiences at a camp for burn survivors inspired her to reach for more. “I did so many things at camp that I didn’t think I could do! It inspired me to take on new adventures.” Since then, Jacqueline has been fulfilling her passion for communications and journalism and working to identify her purpose. “If I could make a difference for even just one person, I could serve a part of my purpose for why I’m still here and living.”Jacqueline has met and surpassed many goals for herself including earning her bachelors and masters degrees, starting a job, traveling the U.S. and overseas, and maintaining a strong and positive social life. She smiles and says, “I have a great group of friends who like me for who I am.” She has even met health-related goals including having her tracheostomy removed after twenty years! Next, Jacqueline wants to work on becoming even more independent by finding her dream job, becoming a home owner, and starting her own family. “I have to challenge myself to show people that I can do all of the same things that anyone else can do, just in a different way. We all want the same things out of life.”