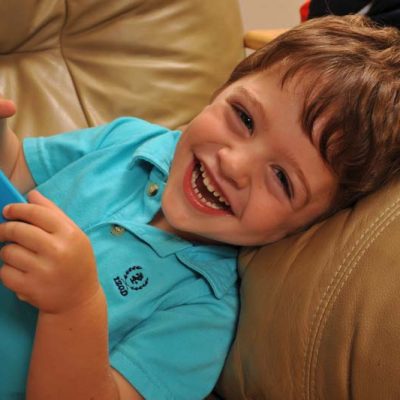 Born seemingly healthy, Zach’s family was shocked to learn that he was suffering from serious intestinal issues. Thanks to medical interventions and support, Zach is now a healthy child with only scars to show for his earlier health concerns.

Zach’s Story: Darla and Eric never missed an episode of “Lost.” But on May 4, 2010, when their son, Zack, arrived six weeks early, not only did they miss the episode, they were thrown into their own unknown world, filled with hospitals, surgeries and more medical terminology they could ever image.

When Zack was born, he weighed four pounds, three ounces. He was breathing on his own and his Apgar scores were good. Two days later that quickly changed. His temperature dropped and doctors discovered severe problems with his intestines. He was flown to Children’s National Medical Center for emergency surgery.

Zack spent his first year of life in and out of hospitals. He had a handful of surgeries. He had an ostomy bag and a feeding tube. “The whole experience was very traumatic,” said Eric. “But that was our life and our normal for a very long time.”

Today Zack is a rambunctious three-year-old, who enjoys playing games on his Leap Pad, spending time outdoors and playing with his dogs, China and Romeo. He is healthy and right where he should be on the growth charts. “He eats like crazy,” Darla said. “You would never know he had problems.”