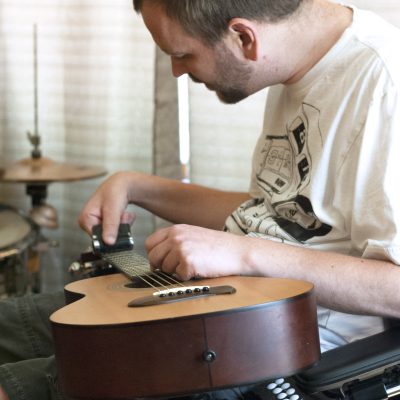 Chuck, a passionate musician, finds his way back to music and community after a car accident left him paralyzed, bedridden and seeking hope.

Chuck’s Story: At 21 years old, a major car accident left Chuck paralyzed and looking to rediscover his love for music. Questioning his recovery, Chuck admits he was “not a happy camper.” Then all at once he had a change of heart. “It was like a switch,” he says. “Life works better when you appreciate people.”

Chuck spent more than a year in the hospital and was bedridden at home for another year after that. When he finally felt ready to begin physical therapy, he took to it with everything he could muster. With each day, Chuck began regaining control of his legs and arms. After six years, Chuck was once again able to play his beloved drums. Now Chuck makes regular trips to the library to play out front. He even brings extra drums so the people passing by can stop and join in. Chuck credits The Coordinating Center with playing a huge part of getting him back out in public again, both physically and mentally. “No way I’d be where I am without The Coordinating Center.”

In May 2016, Chuck earned an Associate’s Degree in Applied Science from Carrol Community College specializing in computer-aided drafting. In addition to graduating, Chuck found another success that day: he achieved his once-daunting goal to walk at graduation. It took years after the accident for Chuck to even consider walking again. Assisted by a gait trainer, Chuck began practicing his walk at his physical therapy sessions. After a year, he had walked a total of 8 miles. On the day of commencement, each graduate was called to walk across stage and receive their diploma. Just when everyone thought the ceremony was complete, the announcer called Chuck’s name. The audience erupted in applause as Chuck began walking carefully across the stage with an infectious grin.

In celebration of Arthritis Awareness Month we continue to bring you facts about Arthritis.

Arthritis is a common way to describe conditions that affect the joints. Diseases of the joints can cause pain, swelling and stiffness and limit activities of daily living. Over time, arthritis can progress and cause irreversible joint damage and disability. The most common types of arthritis are osteoarthritis, inflammatory arthritis like rheumatoid arthritis, infectious arthritis and metabolic arthritis like gout. There are many treatments available for arthritis. Feel free to reach out to your primary care doctor or find a specialized arthritis doctor (rheumatologist) near you by clicking the link below.
ow.ly/uxUn50IWyCW
#mdhwc ... See MoreSee Less

Grab your favorite warm beverage – coffee – tea – hot cocoa and join us! Take this opportunity to learn more about The Center, discuss topics of interest to YOU, and share your experiences.

Corporate Development tapped into their creative side this month in a Paint Lunch Team Event! ... See MoreSee Less

If you or someone you know can't find infant formula for your baby, please see the resources below:

The Coordinating Center is turning 40 next year! Join us for our 40th Anniversary Celebration at CenterFlix on May 11, 2023 at the American Visionary Art Museum. Learn about Sponsorship Opportunities: ow.ly/m4zo50IYzl7 ... See MoreSee Less