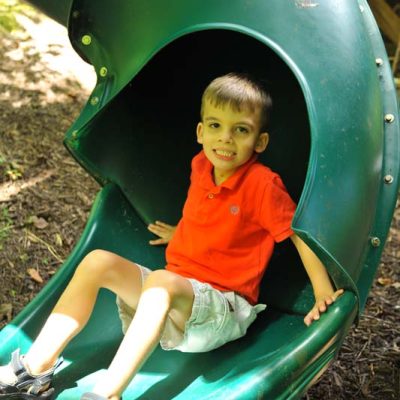 After a difficult adjustment period with a tracheostomy tube, Luke and his family are thankful for the support they received. They now fundraise to celebrate tracheostomy tube removals for others.

Luke’s Story: While Janet’s newborn son was a patient at Kennedy Krieger Institute, a nurse often spoke to her about the Model Waiver Program. “I kept telling her I had insurance and I didn’t need it,” she said. “Finally, I took the information to get her off my back.” Four years later, Janet is so very grateful for the recommendation.

Janet’s third son, Luke, was born with paralyzed vocal chords and problems with his diaphragm.  After 17 days in the NICU, Luke came home on oxygen. Within 10 days, he was admitted to the hospital due to low oxygen levels. In May 2009, Luke received a tracheostomy tube. “We thought he would maybe have it for a year,” Janet said. “Instead this stupid piece of plastic turned our lives upside down.”

Luke has undergone four surgeries. He has spent months in the hospital. Common colds could be debilitating. But through it all, Janet, her husband, George, and their children were able to maintain a normal life thanks to family, friends and the Model Waiver program. “I always said we were going to continue to live our lives as normal as possible,” she said. “Luke went to preschool just like any three-year-old. The only difference is a nurse went with him.”

Exactly four years to the day when Luke had his trach inserted, it was removed. “We have our lives back,” Janet said. “We are free from nurses. We are free from fearing. Luke feels free. We aren’t constantly on him.” One of Luke’s prized possessions from his four-year experience is his Trash the Trach trophy that Janet’s mother had made for him. After witnessing Luke’s reaction to his trophy, the idea of “Luke’s Trophies for Trachs” was born. Luke and his family want to give other children the same joy he experienced when he received his trophy. At a Trash the Trach party for Luke, donations were collected so the family could purchase trophies for children at Johns Hopkins when they reach their milestone of becoming trach free.

Our Impact: Support from The Center helped Luke and his family live a comfortable and familiar life while adjusting to Luke’s health needs.