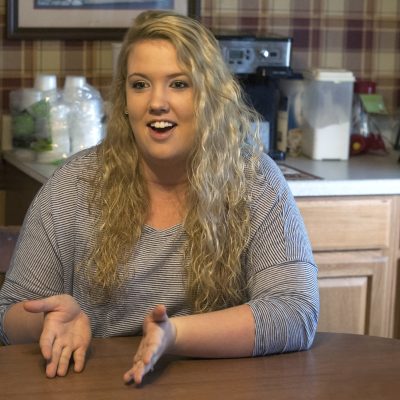 Cara, a driven and successful young adult, is reaching her goals even with the complications of a rare blood disorder.

Cara’s Story: At 21 years old, Cara has her dream job as a nurse. Diagnosed with Von Willebrand, a blood clotting disorder, at the age of five, she knows what it is like to spend time in a hospital. “I practically lived in the hospital and nurses made it OK.”

Since the blood disorder is rare, Cara sometimes had to travel hours to be seen by doctors who were familiar with the disorder. “No one around here would see me because they didn’t know how to help me,” said Cara.

Due to the severity of the blood disorder, Cara could not always play with other children her age; she could not participate in activities that could potentially cause harm. Cara could not ride a bicycle, play sports or ride horses, which was especially difficult since her family lives on a farm. Even a stubbed toe would cause Cara to bruise up to her knee and meant a trip to the hospital for an infusion.

Nothing has stopped Cara from achieving her dream of becoming a nurse. In 2016, Cara graduated from nursing school with straight A’s. “People would tell me I shouldn’t go into the medical field because of my compromised immune system or that I couldn’t do it,” Cara said. “But I can. Nothing should hold you back.”

Our Impact: Cara’s Clinical Care Coordinator helped her locate physicians and an oral surgeon who was familiar with similar blood disorders. Being connected to the right providers has helped Cara manage her health, even in complex environments like working in the ER.