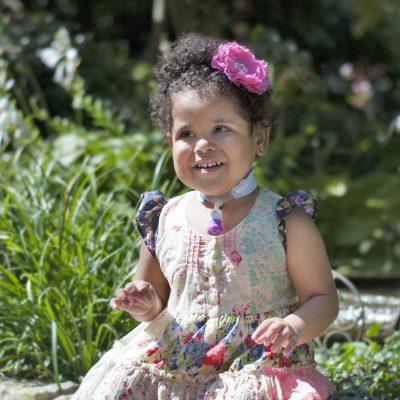 Born the smallest surviving baby in Maryland, Kayleigh continues to exceed expectations and reach milestones while she and her family advocate for other medically fragile individuals.

Kayleigh’s Story: On January 1, 2014, Kayleigh was born at Mercy Medical Center weighing just 11.64 ounces. Prior to being born, Kayleigh experienced intrauterine growth restriction. This meant Kayleigh didn’t have the space she needed to grow and wasn’t getting enough blood, oxygen or nutrients.

At 26 weeks, Nicole experienced preeclampsia and kidney and liver failure. Doctors made the decision that if they didn’t deliver Kayleigh immediately, Nicole’s life would be in danger. Delivered by C-section, Kayleigh entered the world lifeless. It took several attempts to intubate her before she let out her first cry.

Kayleigh spent 10 months in the hospital. When she came home, she was ventilator dependent, on oxygen, had a feeding tube and required 21 medications.

In 2015, Kayleigh was taken off of the ventilator, at least four years earlier than doctors predicted. Kayleigh and her family continue to work toward health milestones. Every week Kayleigh has speech therapy, occupational therapy, a developmental assessment, physical therapy and feeding classes.

June is Pride month - While belonging to the LGBTQI community can be a source of strength, it also brings unique challenges. For those who identify as LGBTQI.

Save cooking for another night and join us this Wednesday, June 22 at Brian Boru Irish Pub and Restaurant . A portion of all prix meals go directly to fostering independence, health and meaningful life for people with disabilities and complex medical needs.

Also known as Freedom Day, Juneteenth marks the moment in United States’ history—June 19, 1865—when the remaining 250,000 enslaved African Americans in Confederate states were legally declared free two years after the Emancipation Proclamation was signed. In the century-and-a half since, the Juneteenth holiday represents a time to gather with family and community, honor the present and reflect on shared history and tradition.

Join us this Friday!

Grab your favorite warm beverage – coffee – tea – hot cocoa and join us! Take this opportunity to learn more about The Center, discuss topics of interest to YOU, and share your experiences.

Load more
A A A
Translate »
Skip to toolbar